• Mercia Jansen is the area manager for Motul Southern and Eastern Africa.

• Jansen owns her space in a male-dominated world and is making impacts wherever she goes.

When I arrived for my interview with Mercia Jansen, area manager for Motul Southern and Eastern Africa, I was not prepared for the unbridled enthusiasm and raw energy of the woman at the helm of the local operations of an iconic lubricants company.

Nor the beaming smile she flashed whenever we touched on a subject she felt particularly passionate about.

A force of magnitude

Mercia is a force of some magnitude. As a woman working in STEM (Science, Technology, Engineering and Mathematics), she has not only created a successful career in this male-dominated space but also encouraged other young women to look at careers in these areas.

And, whether she talks about her work, an opportunity to watch a MotoGP race at Le Mans or her love for motorcycles, the enthusiasm is never far from the surface.

READ: Women in Wheels | Meet the dynamic duo who 'fuel the Ferrari legend' in South Africa

Life seems to have a way of steering us into the direction we need to go, and for Mercia, it's no different. School aptitude tests showed she'd be a prime candidate for a career as an actuary, but she had other ideas - she wanted a job where she could spend more time with people and still do practical work. Once she discovered all the possibilities a career in chemistry offered, there was no looking back.

Her experience included working as chemical distribution manager for Manuchar South Africa; regional manager for CJP Chemicals; and a stint as the owner of her own business. All experiences that stood her in good stead when she applied for her current position in 2017.

Do you know a phenomenal woman who's made an impact or difference in any sphere of the auto industry? Email us your/their story, with images. Mercia says: "In all honesty, I got to the point where I began to wonder if the diversity of my experience wouldn't be a drawback, but it all came together when I filled out my application form at Motul. Chemical knowledge? Check. Logistical experience? Check. Financial management experience? Well, I ran my own business, so check. It was as if everything I've done before was in preparation for this job application."

That smile flashes again as she recalls how, shortly after starting at Motul, she was granted the opportunity to go to Le Mans and attend a MotoGP race in 2017, as well as the Valencia race during the 2019 season. "As a lifelong MotoGP fan, I was thrilled," she enthuses.

READ: You won't believe how much this woman earns per social media post as a car influencer

Although Mercia grew up around motorcycles (her 71-year-old father is a life-long biker who still rides), she says that growing up in a more traditional Afrikaans environment and doing the normal sports activities in school - like athletics and netball - she never really got into motorcycling as a child.

"And then life happened - studies, work, etc. I've always wanted to ride my own motorcycle, and always had a passion for it, but I just never took that step. When I turned 40, I realised it's now or never, so I bought a Yamaha SR250, went for lessons and never looked back. It's changed my life - I've tried many different adrenalin sports, but I didn't stick with any of them for long. And then, when I started riding, I realised that this was what I was meant to do." In time, her example inspired other women, who saw her participate in events like Stofskop, to also take up riding, end she was more than willing to help them take their first tentative steps into another male-dominated field. Talking about this reveals a humbleness about her influence on other women.

"I don't see myself as a role model," she says. "I just enjoy encouraging other women who are interested in biking to get involved, and helping them develop the confidence to break the mould."

"Well," I reply, "I have news for you - that's pretty much the exact definition of a role model." 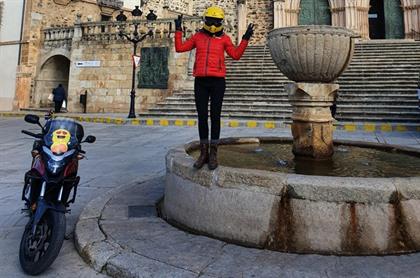 I reluctantly move to the topic which, by rights, shouldn't even be relevant in this day and age: how difficult was it for her to succeed in a male-dominated industry? She replies that while it was challenging things have improved considerably over the past decade, although there are still times when she encounters gender bias.

"But for the most part," she adds, "once men come to accept that I am qualified to be in the position I'm in and that I don't have a chip on my shoulder about having to prove myself, the resistance evaporates, and I am accepted for who I am".

It seems that the combination of not being self-conscious and being confident in her own abilities almost counter-intuitively set men at ease and make them willing to accept her on equal terms.

"I've worked in male-dominated spaces my entire career, and what I've learnt is that I don't need to be the same as men, or even as strong as them, but rather focus on my strengths as a woman, like value and nurture, to get things done."

READ: Women in Wheels | How a humble Charmagne Mavudzi climbed the ranks at Volvo SA

The hour allocated for the interview passes a lot quicker than I would have expected - although calling it an interview would lend undue formality to what was mainly a relaxed, enjoyable chat. But the time is up, and in parting, I ask the (obvious) question: "When the lockdown restrictions are finally lifted, what do you plan to do?"

Her reply is unsurprising, given what I've learnt about her in the course of the conversation: "Ideally to travel to places with great big views. And, of course, to ride my motorcycles. But I suspect we are all going to be very busy at work making up for lost time and sales!"