• The venture was in celebration of World Disability Day 2018.

• The inspirational Cayley Habelgaarn was the focal point of the video.

In December 2013, a three-year-old Cayley Habelgaarn slipped and fell into the swimming pool - the family unaware of what had happened.

After several calls and no response, her mother, Charnay, and grandfather began looking for her; only to find her at the bottom of the pool. Charnay performed CPR on her daughter, but was unable to resuscitate the toddler.

Cayley's mother and granddad rushed her to hospital in the hope that the medical staff could come to their aid. What followed is a remarkable story of overcoming challenges and embracing every moment life has given them as a family. To read Cayley's incredible story, click here.

Come World Disability Day 2018, and Cayley is the focal point in a Ford South Africa video on amphibious wheelchairs.

The local automaker partnered with WESSA, an organization aimed at improving both people's lives and the earth, to produce these wheelchairs that are aimed at making going to the beach more accessible for people with physical disabilities. 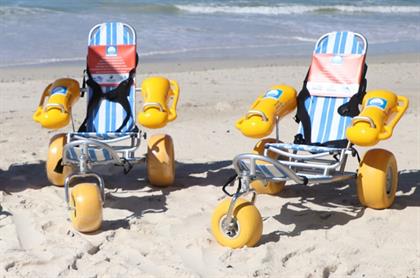 'Wheeled without any problems'

Ford SA said: "Mobility can improve the quality of life for people in many different ways. That's why we were very proud to support this unique project that allows more people to fully experience the joys of the beach - from traveling along the sandy shores to going into the water."

Cayley Habelgaarn and her aunt, Tarren-Lee, participated in the video, and Cayley could not have been a more perfect fit. Cayley said her experience with the amphibious wheelchair made her happy, because she could go in the water and have her body covered.

Tarren-Lee adds: "It was cool to see her reaction, because she loves the water. Going to the beach with a wheelchair is challenging, but the amphibious wheelchair allows her, and others, to be wheeled over the sand without any problems. And her participating in the fun, gave her freedom. It was great to see Ford and WESSA make such an effort for people with disabilities."

Ford and WESSA donated amphibious wheelchairs to four coastal municipalities in South Africa; one each.

The next seven years following on from the incident wasn't easy on the Habelgaarn family, but there were more highlights than lows. And Cayley is a big inspiration for many who are suffering from disabilities. Hence, it was an ideal fit for Ford SA to use her in their video.

Charnay, says: "It was nice to see Cayley having fun, because kids with physical disabilities don't have that freedom to enjoy the little things in life, like going to the beach.

"It's wonderful that they came up with this concept and I just wish that more people could have access to it. My only concern is how accessible these amphibious wheelchairs are; whether it's for personal use or when going to a beach where they are accessible. Other than that, I think this is a wonderful idea that will surely open up experiences for others."

Ford SA stresses that the simple things we take for granted can be challenging to people with special needs, noting that "it was very important for us to do our bit to make the dream of beach access a reality for the physically disabled."