The year is 1964 and Ford has launched its Mustang to eager enthusiasts.

Who would’ve thought that the car that started the whole muscle car trend, would one day be the best-selling car in its class, of all time.

But the Mustang’s success story would not be a one-hit wonder, as in 1968 a movie was made in which the car would feature in a very prominent role.

Bullitt became an instant classic and the car chase scene in the movie would soon cement itself as the catapult for all future chase scenes. You think of a famous car in a movie, the Mustang Bullitt is one that always comes to mind first.

Do you own an old muscle car? Send us your pictures and tell us all about it. Email us here. In 2018, Ford launched a new Mustang Bullitt to celebrate 50 years since the movie hit cinema screens. Unfortunately, South Africa had to wait until 2019 for this very special car to arrive locally, but not before more depressing news was shunted our way.

Because the Bullitt will only be made in limited numbers, South Africa received an allocation of 200 units in 2018. As time drew closer to its local release, Ford Global gave word that only 100 units would be availed for our market. By the time the launch came around, Ford South Africa received a contingency of only 50 units.

The Bullitt made its way to the Wheels24 garage and we decided to round up some other 'Ponies' from Cape Town along with their owners, including a 1973 Mustang Mk1, a 1969 GT Coupe, and a 1965 Fastback to name a few. The bevvy of 'Stangs went on a little run together before everyone got to know each other, and the Bullitt, a bit better.

READ: Ford's new Pony driven - We take the upgraded Mustang for a spin

With all that said, the Ford Mustang Bullitt lives up to every expectation… and more! It uses the same naturally-aspirated 5.0-litre V8 engine as the Mustang GT, but power has been increased by 7kW to 338kW. Torque remains unchanged at 529Nm. A brilliant six-speed manual gearbox sends power to the rear wheels and Ford’s MagneRide suspension is fitted as standard on the car.

For just under R1.0-million, the Mustang Bullitt comes with a lot of heritage and culture. But worry not, because prospective owners see the return on their investment once this modern classic’s value begins to increase.

PS: Better be quick, because only a handful of units are still up for grabs. Wheels24'sJanine Van der Post says: "You can't help channeling your inner Steve McQueen when you're driving the new Mustang Bullitt. There's the familiar white round gear knob for the exquisite six-speed manual gearbox, the Bullitt branding on the steering wheel, sporty bucket seats, and on the rear end of the car. But most of all, that tuned V8 under the bonnet (our local version is detuned compared to the version in the US).

"The sonorous roar of the naturally-aspirated 5.0-litre V8 is just heavenly and makes you want to transport yourself into the 1968 chase scene of the

Bullitt movie all the time. Mostly because the desire to keep your right foot in the corner of the footwell is always permanent. Whether you're stepping in, or out, of the Mustang Bullitt, heart palpitations are a guarantee, and it's absolutely just exhilarating.

"Ford says of the 50 cars which were marked for SA, 45 are painted in the original 'Highland Green' body colour while somewhere in our country there are only five other Bullitts which are completely black. Talk about exclusive. 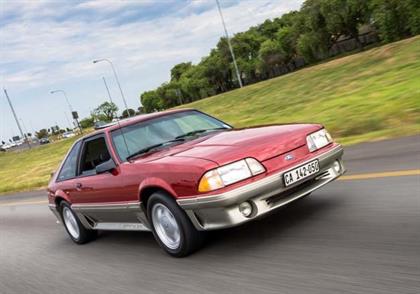 "Nothing else brings people than cars, rugby, and a lekker braai here in our homeland, and a few weeks ago on a cloudy Saturday morning, Ford's Mustang Bullitt did exactly that. We chose a public venue because I wanted fellow petroldheads to come and see the beast in person too. And, as we arrived early awaiting the rest of the cars, the Bullitt made its presence felt as young and old approached the monstrous 'Stang.

"And then you heard them pulling up, one by one, before there was any glimpse of them, those V8 Ponies came galloping down the straight.

"Everyone's heads turned when Feizel Gierdien almost drifted his 1973 Mustang Mach 1 into the car lot, then Richie Richards, Grant Cloete, and his cousin Colin Davids with the most beautiful 1970 Mustang Mach1 in mint condition. The rest followed suite. But there's just an indescribable camaraderie when a bunch of petrolheads come together and admire a bunch of cars - old or new. "It was as if we have known each other forever, laughing and taking in the beauty of each car with mutual respect. When we got ready to leave, hearing those V8s all fire up and burble was like hearing a choir of heavenly Angels singing harmoniously in unison. Breath-taking.

"We drove in convoy on the highway, leading the pack in the Bullitt, and headed to the northern suburbs to a bicycle shop. To say I was confused, was an understatement, but I followed the directions of my husband Clavern. All he said was: 'Just wait and see. You're going to love it.' I could do nothing but trust him.

"After we navigated the cars into the tight parking lot of J.P Van Zyl's Recycle bike shop, you immediately notice several older muscle cars standing around. It's also the reason we had to park so carefully and almost fit into a puzzle. The Bullitt of course got the prize spot. "You walk in and J.P is a proper cycle boy, bicycles everywhere and a couple of customers enquiring about some apparel. But at the same time, the rows of metal babies are difficult to miss in the corner of my eye. I was not expecting to see such a huge collection of muscle cars. Stuff you only see in the movies. But that's another story all on its own.

"But snap-shifting that Bullitt, hearing that resonating rumble the harder my right foot found itself deeper into the corner of the footwell of an extremely limited car... Yep, one of the best days of 2019 for me, and one of the best cars I've driven all year.

"Thank you Steve McQueen for the inspiration."