If you're restoring a true collector's car, parts can often be difficult to source.

Either nobody wants to sell them, but in the event someone does agree to do so, it will most likely garner a massive price tag.

Original wheels from performance cars are particularly scarce and finding a set of them in good condition means that luck is definitely on your side.

Do you own a set of exclusive alloys with an interesting story attached to it? Please Email us.Because most aesthetic parts from a base model and performance variant is relatively the same, it makes it easier to assemble than the wheels.

Most owners know the value of what they selling while others simply want to clear garage space and get rid of it, even if it means selling at a cut-price.

Below is a collection of wheels that are challenging to find these days: The Opel Superboss will forever be a local legend. It was the ultimate boy-racer that sported a fitting appearance, and one that was enhanced by the now-rare 15-inch Alluettewheels. There is a replica of this wheel called the Borbet. The Mazda 323 200i 'EGI' was the performance variant of the 323 range and also came in hatchback guise. It featured a host of extras like the rear spoiler, semi-leather seats, and upgraded 14-inch wheels many people also refer to as the 'Spoke'. 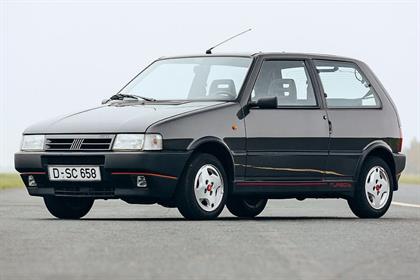 The Uno Turbo was one of those compact performance cars which made its way to South Africa. It's stand-out feature was the 'Scorpion' wheels that came in a 175/65/13 profile.

It sported a turbocharged 1.4-litre engine that made 87kW and 161Nm.