The BMW i8 as an automobile sculpture: An artistic experiment by Thomas Scheibitz

Internationally renowned painter and sculptor Thomas Scheibitz redesigned the BMW i8 of his long-time close friend Bernd Heusinger based on their continuous exchange.

His work was not commissioned by BMW, nor is it part of the BMW Art Car series – instead it is an independent experiment in form and colour. The resulting automobile sculpture was first presented to the public on May 18 at Scheibitz’ Berlin studio.

READ: We get behind the wheel of the only BMW i8 Roadster in SA

Born in 1968 in Radeberg near the city of Dresden, the artist regards the surfaces and colour schemes of his sculptures as of vital importance. He believes that line, contour and volume “must exist as part of the known entities of the physical world”.

For him, industrial design represents a major antagonist and a source of inspiration alike.

Scheibitz understands sports cars as designed sculptures, as dynamic results of a synthesis of technology and creativity. Asked about his experimental automobile sculpture "Scheibitz x Haysinger", Thomas Scheibitz said, "Radical content is a question of form. Traditional sculptural concerns such as visual perspectives, detailed imagery, spatial perspectives, qualities of reliefs, symmetry as well as dissolved symmetry and illusion were the starting points for my design of a body of a modern vehicle." Scheibitz is known for creating new associations by playing with set pieces and various references in his often brightly coloured paintings and sculptures. The colour schemes he applied to the design of the BMW i8 in the manner of stylistic elements create a category of images that fit seamlessly into the open oeuvre of the artist. 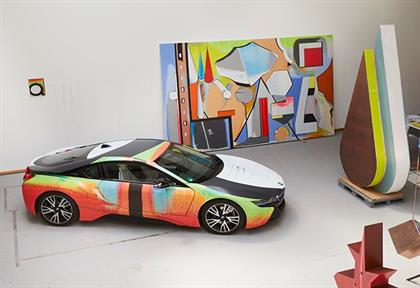 In addition, Scheibitz used the dynamic flow of the lines to play with the futuristic surface area of the body. The artist develops this idea even further by creating a visual dialogue between the innovative carbon structure of the vehicle and the texture of traditional canvas.

"Greatest possible precision coupled with greatest possible openness,” he once commented on his oeuvre, and this tenet holds equally true for the design of his automobile sculpture. Originally, the ideas regarding an automobile sculpture were based on a small-scale painting created by Thomas Scheibitz in 2017. Scanned and enlarged fragments of this painting can now be seen in various contexts on the surface of the BMW i8.

In the tradition of his creative process of research and layering, Scheibitz has been focussing on the design of the hybrid sports car for a number of years.

In 2016, he created “Holy Motors”, a tubular sculpture painted in multicoloured vinyl paints exhibited in the rear window of a BMW i8. The work was yet another result of the friendship with Bernd Heusinger, author, director and founder of the agency “Zum goldenen Hirschen” and CEO of Hirschen Group. For Scheibitz, who was made Professor of Painting at the Academy of Fine Arts Düsseldorf in 2018, the creative aspects of painting and sculpture are of equal importance.

Following a solo exhibition at Kunstmuseum Bonn, Scheibitz presented numerous paintings and sculptures in 2018 as part of “The Hunter in the Snow” shown by the artist’s gallery Sprüth Magers in Los Angeles. From September 11, 2019, to January 31, 2020, the Nationalgalerie der Staatlichen Museen zu Berlin will host “Picasso/Scheibitz”, a special exhibition at the Berggruen Museum presenting over 40 works of each artist.