SEE | The curious tale of the SA-only Nissan 'Z' models

Last month, fifty years ago, the most important model in the history of Nissan – the Z-car series – was introduced in Japan as the S30 Fairlady Z, and as the Datsun 240Z sports car in the United States.

READ | 50 years of Nissan roadsters: A look back at Z special edition models

Enthusiasts praised the cars for their looks, reliability, performance, and affordability and the popularity of the Z-car range established Datsun/Nissan as a serious auto brand outside of Japan – even more so than the Skyline and GT-R series.

On October 18th, #1969, we announced an all-new car model that would go on to change the world of sports cars forever. Happy 50th anniversary to the #Nissan #FairladyZ. #TBT #Heritage pic.twitter.com/Uov8j7193r

Since then six generations of the Z-family of GT cars has been manufactured by Nissan; the first four generations up to 1999 and after a short hiatus until 2002 a further two generations up until now.

South Africa never received the original 240Z version and only a small number of S30 Datsun 260Z (released in 1974) and 280Z models (following a year later) made it to our shores. Local dealers clamoured for Z-cars but they just weren’t available due to worldwide demand, and the first Z-model officially introduced to the country in 1996 was the fourth generation Z32 300ZX.

However, by 1976, when it was clear that South Africa was not in line to receive the Z-cars, Datsun South Africa decided to commission a special version of the 140 GX coupe derivative and call it the 140Z; also for purposes of homologating it for modified car racing in South Africa.

With assistance from master tuner, John Conchie from Alconi Developments in Johannesburg (who also helped to create the 1600 SSS Zero), Datsun turned the 140Y GX coupe model into the 140Z. Basically a re-badged Datsun Sunny Excellent GX (model designation (P)B210), the cosmetic differences between the 140Z and the 140Y GX were a DX/GL front grill (with D-grille badge but without integrated driving lights), front and rear spoilers, different side marker lights, blacked-out bumpers, mag wheels, unique exterior graphics and a 140Z badge at the rear. After some Conchie camshaft treatment and breathing through Dell’Orto carburettors the L14 engine in the small “Z-car” produced 85kW (unheard of in a 1400cc at the time) and 130Nm of torque – enough power to give the 140Z a sub-10 seconds 0-100km/h time under and a top speed of 181km/h.

The diminutive coupe with the big heart proved very popular and was used in numerous forms of motorsport; with great success. Its biggest feat was its real David vs Goliath performance in the 1978 Wynn's 1000km race at Kyalami; beating much more fancied BMW 530 and 535, Fiat 131 Abarth, Ford Escort RS and Mazda RX teams to the chequered flag. It was an emphatic victory, with Brian Cook and Phil Adams in a 140Z first over the line, closely followed by George Santana and Hennie van der Linde in a 140Y GX (as indicated on the entry list) in a race of attrition which saw many of the leading teams retire.

Following the success of the 140Z Nissan-Datsun South Africa announced the 160Z (based on the GB211 160Y Coupe) in July 1978 with upgraded L16 engine, as used in the bigger 160U SSS, a high-performance camshaft and twin Hitachi side-draught carburettors based on the British SU type carburettor.

Although its engine was less powerful – putting out 71kW versus 85kW of the 140Z – it had more torque (140Nm at 4 200rpm against the 140Z’s 130Nm at 5 000rpm). The brakes were uprated, and the rear springs and shock absorbers were also improved to eliminate axle-tramp. To emphasize the link between the local Z-badged cars and the real 280Z, the 160Z’s colour scheme was based on the 1977 280Z special edition Zap car in the United States, offered as a "special decor package" and also used as the pace car in the 1977 Long Beach Gran Prix.

The canary yellow with red, orange and yellow inlayed black decals, colour matched high back seats and Mexican stripe-cloth stitched in the centre panels instantly distinguished the 160Z from other Y-models.

It also had front and rear spoilers but they differed from the ones used on the 140Z, the DX/GL front grille with a “Datsun Z” badge and black rear window louvres, manufactured by Perana Louvres South Africa. Its unique alloy wheels were designed by Tiger Wheels and were later fitted to the 140Y and 160Y GX models.

In total, Nissan-Datsun South Africa produced 120 160Z’s in 1978 and 121 in 1979 before the limited edition “Z-car” was discontinued in 1980 – and South Africans had to wait another 15 years before the fourth-generation Z32 300ZX was officially approved for local introduction.

The real Z, at last

So, why the sudden change of heart by Japan? Well, American Z-car sales reached a million in 1990 but was in rapid decline by the mid-'90s – due to the trend toward SUVs and rising exchange rates. This, and the ever-escalating price of the ZX, led to its demise in the US, with sales ending in 1996.

By this time the ZX was powered by a 3-litre V6 engine with dual overhead camshafts and variable valve timing (VVT) producing 166kW and 268Nm, while the turbo variant, with twin Garrett turbochargers and dual intercoolers, now produced a GT-R-chasing 220kW and 384Nm of torque.

This beast, with a 0-100km/h time under 6 seconds and a top speed limited to 249km/h, was named as “One of the Ten Best Cars in the World” by leading motoring publications at the time. In 1993 a convertible version was introduced for the first time in the Z-car's history but it was never made available locally.

As in the UK and Europe, all Z32s offered locally were in 2+2 TT form and while ZX sales in the US ended in 1996 production of the model in Japan continued until August 2000.

Although Nissan displayed the 240Z concept car at the 1999 North American International Auto Show and the Z Concept in 2001, the new, fifth-generation 350Z, powered by the 3.5-litre VQ35DE V6 engine, was only released in 2002 – to wide acclaim. The 50th Anniversary Edition (not yet released in South Africa) is available in normal, Sport, Sport Touring and Nismo grades with a choice of 6-speed manual or 7-speed auto transmissions and a unique two-tone paint coat paying tribute to the renowned Brock Racing Enterprises (BRE) livery that adorned the famous American BRE Datsun racers of the late 1960s and early 1970s. 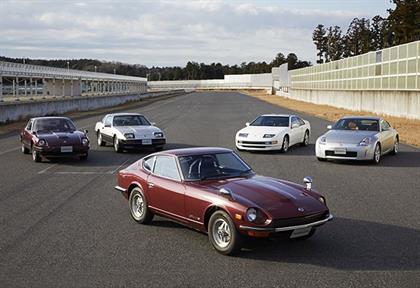 Still, the current Z car is old and in dire need of a replacement… Nissan is acutely aware of this and is considering its future but according to Nissan Chief Planning Officer Philippe Klein (as reported by Top Gear and Autocar), a replacement should not be expected soon as it seems the company is still evaluating the possibility of an electrified powertrain for the next Z-car.