SA-born Gordon Murray: Lighter is faster, as he builds most driver-focused supercar

We're proud of Gordon Murray, and not just because he is the man that penned the McLaren F1. Rather because he is the South African-born designer of the F1, widely regarded as one of the best-engineered cars in the world.

Murray's legacy as a five-time Formula 1 technical director laid the foundation for his impressive McLaren F1 and his latest project: the T.50.

The T.50 is a Gordon Murray Automotive project that aims to rewrite the supercar rule book.

The 73-year-old has always been an advocate of less weight, in fact Professor Murray said: “Today, the enjoyment of driving has been lost as so many supercars only come ‘alive’ at the upper-ends of their performance capabilities."

It's smaller than a Porsche 911 and will offer space for three passengers and luggage.

"Chasing a top speed only adds weight (notably through ever-more powerful engines), so the future of true performance cars lies in shedding weight intelligently", he said.

The Cosworth Powertrain engineers, have got the weight of the engine down to less than 180kg which makes it the lightest road-going V12 ever made and more than 60kg lighter than the BMW S70/2 V12 in the McLaren F1 – while generating more power. Of course it needs to offer superior driving dynamics as well, and Murray says a heavy car can never deliver the dynamic attributes of a lighter car – even if it has the same power to weight ratio.

While it is possible to disguise a heavy car’s dynamic capabilities with complex active suspension and sophisticated electronics, the agility, responsiveness and reward of a lightweight vehicle cannot be matched.

We can't wait to see it in production specification. 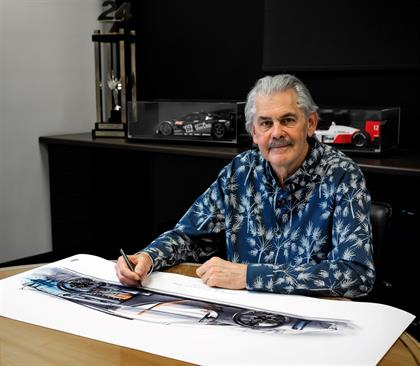