Look how you've grown! Why the Toyota Yaris is more than just a daily runabout

• The Toyota Yaris is better known as a small, city car.

• The automaker has developed the Yaris into a pocket rocket.• The GRMN version rivals VW Golf GTIs and Ford Focus STs.• For more motoring stories, go to www.Wheels24.co.zaNever in a million years would you have thought that a Toyota Yaris would be trading blows with the likes of a VW Golf R or a Ford Focus ST of the modern era.

That is how much the tides have changed in recent years and quite frankly, it's about time that Japan has something to rival the competition.

GTIs, STs and Audi S3s are the overwhelming choices for most people looking for their speed fix, and it shows because roads are filled with them.

The last time any Japanese automaker had an affordable hot hatch was Toyota with the 147kW RunX RSI, and that was almost 20 years ago. The new Honda Civic Type R is the only Japanese hot hatch on the market from which to choose and even then, it is financially out of reach for most.

Would you like to see more performance offerings from Japanese automakers, or do your own one you'd like to tell us about? Please email us.The Auris TRD was also meant to fill the void but it fell short of the mark and only lasted two generations locally with the Corolla Hatch taking its place, although it is yet to spawn a GR version.

Even though South Africa never received it, the Toyota Starlet hatch was popular in Japan since it was introduced in the 1970s, with later models spawning small capacity turbocharged engines coupled with sub-1000kg kerb weights. The Starlet's production line ran for a total of five generations and in 1999, the decision was made to replace it with the Yaris. Again, SA never received the first generation of this new model but was confirmed for the second.

People had mixed opinions, particularly about the styling and design aspect, with many placing it in the daily runner and student car categories. It was reliable and affordable, but nothing more.

It was during this time that local petrolheads first got a glimpse of a "fast" Yaris with the second generation when Toyota released a limited amount of models sporting a naturally aspirated 1.8-litre engine that made 97kW and 173Nm in a body that weighed just over 1 000kg.

It might only have been sold in minimal numbers, but it gave enthusiasts a glimpse into what a performance-orientated Yaris could be like. In the ensuing years, there would be more to come. Deeper voice, hair under the armpits and acne free, the Yaris is no longer the adolescent teenager it once was.

Toyota knew they had a strong performance following in South Africa and wanted to test the waters by flexing the muscle of its newly named performance arm GRMN - formally known as TRD. 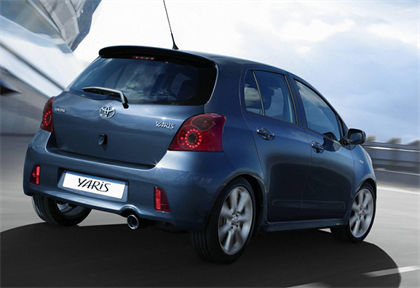 Testing the waters in this case meant bringing a supercharged 156kW pocket rocket to South African shores, albeit only for promotional purposes, but now everyone knew Toyota wasn't playing around and the Yaris no longer used to be what it was.

Earlier this year, Toyota unveiled yet another Yaris to the world - one that would completely blow everything out of the water. Although still unconfirmed for local shores, the new Yaris uses a turbocharged 3-cylinder, 1.6-litre engine that smacks out 200kW and 360Nm, which is sent to all four wheels via a GR-FOUR permanent 4WD system. The WRC-inspired hatch is potent in every way and lays down a marker in a much-contested market. A Yaris such as that would definitely not come cheap, but those yearning for something other than a Golf R or Audi S-Line would welcome the addition.

Even though there is the Hilux GR Sport bakkie also in the line-up, the Yaris allowed itself to be the perfect guinea pig to chuck speed at.

Who would have thought the Yaris would become the next performance flagship alongside the Supra? The reality is that the once nimble city car has been a good boy over the years, eating all the veggies and it is now reaping the benefits of brute strength.

From conquering the 24 hours of Le Mans not once, but twice, and reviving the legend that is the Supra, Toyota has established itself as a powerhouse which shows no signs of stopping in the near future.