'A car that starts a conversation': The BMW 1M Raze GT Build

Many of you will know Marco Svizzero’s first build, a V8 1M clone with the RevoZport 1M Raze Kit. We partnered with the project early on and watched it progress and reach dream car status.

The car received tons of press both online as well as at events. It was displayed at Bimmerfest three years in a row, winning 2nd place in Best Modded in 2014, and the 3rd place award at Festorics in the Clean Class – which is insane!

It was featured on the European Car Magazine cover and in the title article and presented in Drive Channel's Tuned with Matt Farah. Last but not least, it had an episode on Jay Leno’s Garage. In October 2013, we asked Marco if he could help us find a 1M in the Los Angeles area, as we needed it for a 3d scan to design the Raze GT body kit around. The Raze GT kit was to be the most aggressive commercially available production BMW 1 series widebody. 3d scanning is superior to the traditional sculpting approach as it not only allows for more flexibility and accuracy in the design phase, but it also ensures far superior fitment.

In 2013, RevoZport was just piloting this technology which has now become standard. To express our gratitude for Marco’s help on the scan, we initially offered him a Raze GT kit for the V8 1 series. To our surprise, he had plans to build a sequel 1 series. 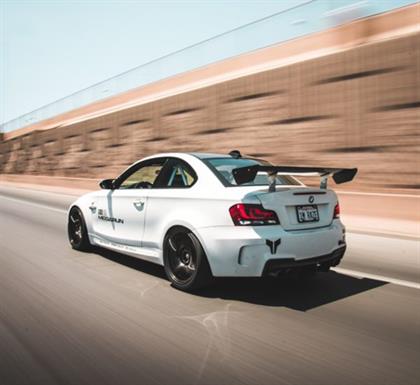 When we asked him why he would build a second car of the same chassis, Marco explained: "One of the best things about my s65 swapped 1M Clone is that it is a car that starts a conversation. It’s a build that people stop and look at for a long time and it often sparks the same arguments. NA vs FI, HP vs TQ, modern M3's growing weight, 1M's merit as an M car, and questions of why BMW didn't put an S65 in the 1M all come up as people look over the car.” Marco went on to explain that there are two sides to the argument. His s65 swapped 1M clone, despite being entirely modified, is an extremely purist focused NA car. The new build, however, will be FI and more extreme.

"They will each represent a side of the discussion and despite being so similar, will be very different in purpose and driving experience. The sequel car will be an RWD rallycross build. Our challenge will be adapting the chassis to a new application,” Marco concluded. When we finished designing the Raze GT, we sent Marco the first production kit for the basis of the new build. While the car is still a work in progress, we just love seeing it take shape and are proud to have partnered up on another interesting and unique build.

Stay tuned for more updates. And definitely, don’t miss out on our previous blog about the incredible Nio ES8.