An eye-catching original turns 50: with the 914, Porsche was the first German manufacturer to bring to market a production mid-engined sports car in 1969.

To celebrate this anniversary, the Porsche Museum has invited all fans of the two-seater to the “Typically Porsche Day” on Sunday, June 2, at the start of the special show “50 Years of the 914 – Typically Porsche”. Over 120 owners of private 914 models, including from the club scene, will be in attendance.

As well as a range of promotions, visitors to the “Typically Porsche Day” will also be able to enjoy expert panels on the 914. For example, former development and race engineer Roland Kussmaul, former chassis developer and race driver Hans Clausecker, as well as engineer and race driver Günter Steckkönig together with author Jürgen Lewandowski will look back at the genesis and legendary moments of the Porsche 914.

To celebrate the 50th anniversary of the 914, the #Porsche Museum has invited all fans to the “Typically Porsche Day” on Sunday, June 2. The details: https://t.co/0C4XoCqAG0 pic.twitter.com/47LCe4Ugt7

Anthony Hatter, Head of Design Quality Style Porsche, together with former Porsche development engineer Jürgen Kapfer and product developer for race cars Hermann-Josef Steinmetz, will explore the question of the roots and above all the future of the mid-engined concept at Porsche and investigate why the mid-engined configuration, design, technology and lifestyle are typically Porsche today.

Entry to the “Typically Porsche Day” on Sunday, June 2, is free.

The twelve spectacular exhibits featured in the special show will cover the breadth of the 914 and the creations it inspired.

They will include the 914/4 and 914/6 production models with VW four-cylinder engine and Porsche six-cylinder engine respectively. Also on display will be the first 914 ever built and one of the two Porsche prototypes with eight-cylinder racing engine.

Another exhibit will be the 914/6 GT. It was made available to the ONS (Obersten Nationalen Sportbehörde (Supreme National Sports Authority)) in 1972 as the first safety car in the world – equipped with new safety systems and a modern fire extinguishing system. Also appearing will be a privately-owned reconstruction project with a 350 PS V8 engine from a 928 GTS as well as a 916. The VW Porsche also inspired the renowned car designer Albrecht Graf von Goertz and the French coachbuilder Heuliez to design their own 914 sports car creations, which will also be on display. The special show will run in the Porsche Museum until July 7.

In the mid-1960s, Porsche was striving to expand its position in the market with a sports car in the promising segment beneath the 911. However, such a project would not have been viable for the small company on its own. The Zuffenhausen-based car manufacturer found a partner in Volkswagen, since at the time VW was looking for a successor to its then rather outdated Type 34 sports coupé, better known as the Karmann Ghia. Ferry Porsche and VW Director Heinrich Nordhoff shook hands on a joint project in the mid-1960s.

When Nordhoff unexpectedly died in 1968, the project was in danger of collapsing. Ferry Porsche worked out a solution with the new Managing Director of VW, Kurt Lotz: the two companies established the VW-Porsche sales company. It marketed the project on the European market as the VW-Porsche. It was available in two versions: the 914 with a four-cylinder engine from Volkswagen and the 914/6 with a six-cylinder engine from Porsche. In the USA, both variants were sold under the Porsche marque. The 914 factory car’s biggest success is a triple victory in the Marathon de la Route held at the Nürburgring in 1970. Many victories were also achieved in customer motor sports. The six-cylinder version had a successful start in the USA in various racing series and achieved several class victories. A 914/6 GT from Team Sonauto won the GT class at Le Mans in Europe in 1970.

The VW engine was a completely new design and marked the first production injection engine offered by the marque. The 1.7-litre four-cylinder model developed 80 PS at 4,900 rpm, meaning it could reach 100 km/h in 13 seconds and topped out at 177 km/h. In contrast, the Porsche six-cylinder engine came from the 911 T and was designed for maximum sports performance with its overhead camshafts, triple carburettors and high-performance capacitor ignition. 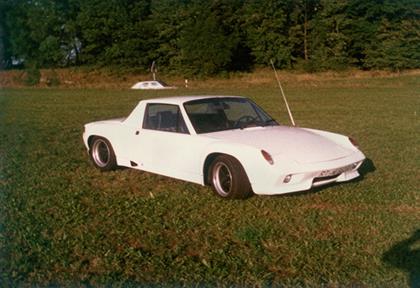 The two-litre boxer offered 110 PS at 5,800 rpm, making it both much more powerful and more rev-happy than its VW counterpart. With a dry weight of 900 kilograms, or 940 kilograms for the six-cylinder variant, the 914 boasted a truly exceptional power-to-weight ratio. Last but not least, two legendary special models helped to cement the two-seater’s outstanding reputation: the 914 S with eight cylinders. The three-litre boxer engine from the Porsche 908 racing car, which dominated circuits throughout the 1970s, sat in front of the rear axle.

Thanks to its injection system, the first vehicle produced around 300 PS and was handed over to Ferdinand Piëch, the head of development at the time, as a test vehicle. In the second vehicle, the eight-cylinder engine with carburettors achieved 260 PS.

It was a road-registered car presented to Ferry Porsche to celebrate his 60th birthday. Both 914 S models had a top speed of around 250 km/h, and served as the basis for a short run of high-performance 914 models in 1971.

Eleven vehicles were equipped with six-cylinder engines from what were then the most powerful models: the 911 S and Carrera 911 RS with 190 PS and 210 PS. They were then optimised for motor-sport purposes and christened the 916. The distinctive two-seater with its characteristic Targa roof was aimed mainly at younger buyers. With an initial basic price of 11,955 Deutschmarks, the Porsche 914 model series became an absolute sales hit.

Between 1969 and 1975, 115,631 four-cylinder 914 vehicles were built. Most of the vehicles were exported to the USA, where the 914 was marketed exclusively as a Porsche without the VW suffix. As a result, it is one of the best-selling sports cars in the world.