The overwhelming demand has incentivised Toyota to produce a second batch of its enormously popular Namib edition bakkies.

Launched late last year, the Land Cruiser Namib edition features upgraded styling and 4x4 elements to ensure that it keeps on exploring, long after the convoy has stopped and turned around.

The most important news about this second consignment of Land Cruiser Namib bakkies is that there will be a single-cab option. And this will be heartening to off-road adventurers who don't have a family, because not everybody who desires the ultimate 4x4 bakkie option, requires a double-cab.

Single-cab bakkies have superior loadability compared to double-cabs because they retain a longer loadbox.

What you sacrifice in rear seating and cabin-stowage with a single-cab, you can gain in ultimate load-carrying ability. It's also far more comfortable to sleep in the back of a single-cab's loadbox, than the much shorter double-cab equivalent. 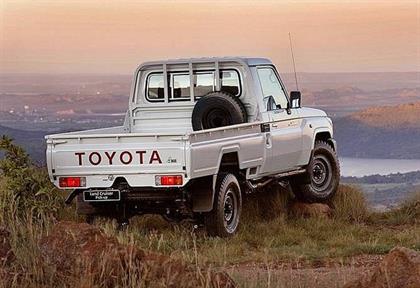 What are the single-cab 4x4 options?

There are issues with Nissan's Patrol. It has a smaller and less powerful engine, lower ground obstacle crossing clearance and only a rear differential lock. The Patrol will follow a Land Cruiser Namib into challenging terrain but never lead the way. Long-term value with a Namib

They might be slow, even when powered by the 151kW 4.5-litre turbodiesel V8, but nothing stops a Namib single-cab. For expedition leaders who need optimal packing space for gear, instead of passengers, the presence of a Namib single-cab Land Cruiser in Toyota's local bakkie portfolio is a most welcome addition.

As an ownership proposition, the Land Cruiser Namib single-cab sets some new standards. It becomes South Africa's most expensive single-cab bakkie, by quite some margin. At R842 200 it is nearly R200 000 more than a Nissan Patrol and R120 000 dearer than a standard Land Cruiser 79 single-cab V8.