• Ranger Thunder to be built in South Africa, both for local and international markets.

In case you were not aware, Ford South Africa will be bringing its special Ranger Thunder to the local market.

Estimated to launch before the end of 2020, final pricing and specifications will be announced when the bakkie makes its local debut.

However, after a chat with an anonymous source, we learned several interesting facts about the Thunder.

So let's not wait any longer: Here are four things you should know about Ford's new arrival . 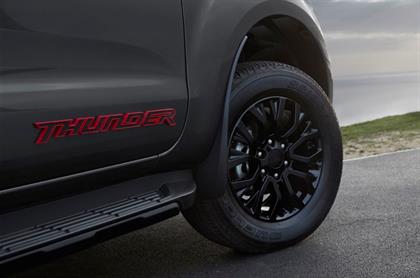 1 It will be built in SA

Did you know that the Ford Ranger is built in South Africa? Yip, it's a #ProudlySA product. The engine is assembled at the automaker's Struandale plant in Port Elizabeth, whereafter it's transported to the assembly plant in Silverton, Pretoria where it's fitted to the Ranger.

But the bakkie is not just built in SA for the local market, no. The Ranger is one of the most successful export products and continues life in places like Europe, Australia, New Zealand, and the greater African continent.

And yes, the Thunder, according to our source, will be built locally, too. As things stand, it does not seem as though the Ranger WildTrak's 3.2-litre five-cylinder diesel engine (147kW/470Nm) will form part of the Thunder lineup. Instead, the range of single- and bi-turbo 2.0-litre diesel engines will power the Thunder.

The single turbo double cab XLT model (132kW/420Nm) will form the base for the Thunder, as well as the bi-turbo WildTrak (157kW/500Nm). Both engines are mated to a 10-speed automatic gearbox, with the former available only in rear-wheel-drive. The WildTrak can be had in either 4x2 or 4x4. 3 What it could cost

Our source could not give a definite answer, but did say that one could expect to pay a premium of around 'R35 000' over the double cab models the Thunder is based on.

Note: These prices are speculative, but it will allow you to gauge your budget if you are keen on acquiring this limited-edition bakkie. As you may have gathered, the Ford Ranger Thunder will be available in limited numbers only. While we wait on the bakkie's launch for Ford to confirm how many units will be made available locally, we do know that the European market will receive 4500 Thunders.

We will not hazard a guess as to how many models South Africa will receive, but it can be assumed that a fair number of these bakkies could be made available locally. Especially given our country's affirmation to bakkies and the Ford Ranger. The Ranger is 1) the second best-selling bakkie and 2) one of the top five best-selling vehicles locally, so it would make sense for Ford SA to give us a little incentive.

READ: Ford's new Ranger Thunder expected imminently - How the bakkie could be priced when launched in SA

Wheels24 can confirm that we've seen the Thunder in the flesh: a white single turbo XLT model. In keeping our source anonymous, we refrained from taking pictures of the bakkie, but it is every bit as exciting to look at as the pictures suggest. The blackened rims, the black roll-bar with red inserts, the grille with its menacing red inserts, and the 'Thunder' lettering on the front doors are clear indications that this bakkie means business.

And inside, red stitching on the leather further adds to its unique character.