What it's like to drive a R5.5-million Lamborghini Huracan EVO for the first time

I wasn't an ordinary little girl growing up, although I was a sweet child, according to my parents. But as soon as I could let my Mother know that I hated the frilly dresses and the huge bows she would tie in my hair, it was still a losing battle for me late into my teen years.

Although I played with Barbie dolls with my older neighbour Shantal, I loved playing with her brother Gareth more as we played with those little toy soldiers, and little cars in their then-incomplete garage. But girl stuff, nope that wasn't for me. I wanted to be a veterinarian or a marine biologist so I could look after my imaginary tiger and my other real pets.

Instead, I wanted to know what my Dad was doing in the garage with his mint-green Ford Escort. What he and my older cousins were looking at under the bonnet. I'd hang around, absorbing the passion they had for cars. I didn't know a thing about it, but there was one brand that stirred emotions in my soul that I could not comprehend until I was much older, and it was Lamborghini. The Diablo to be exact was the car that intrigued me. If someone had to tell my 9-year-old self then that I would be driving the latest Huracan EVO late into my 30s, I would have called them crazy.

It's the stuff that dreams are made of, excuse the cliche. Even now, days after driving that beautiful machine, I'm still getting butterflies, and my stomach knots up like I'm about to go on the fastest roller-coaster ride in the world just thinking of my time behind that sexy steering wheel. Having being introduced to the Huracan Performante a couple of years ago, albeit with a Lambo driving instructor as a passenger, this time was going to be a whole lot different as there were no restrictions. Although thinking back, that car was a totally different beast, one you needed a set of steel balls for. While the EVO is a wild child, it's much easier to tame, much like Elsa does with her water stallion in Frozen II. But even the ice princess needed to know what she was doing to gain full control of her magnificent creature.

Every aspect of the car's newly designed elements are for improved aerodynamics. The automaker says: "The EVO is the first Lamborghini with predictive logic on vehicle dynamics control which in essence is a fully-integrated Lamborghini Vehicle Dynamics Control System combined with all-wheels drive, all-wheel steering for redefined parameters of responsiveness, agility and easiness to drive."

There's also a new rear-wheels steering and torque vectoring system, says the automaker, and the new Lamborghini Dinamica Veicolo Integrata (LDVI): "a Central Processing Unit that controls every aspect of the car's dynamic behaviour, fully integrating all of the car's dynamic systems and set-up to anticipate the next move and needs of the driver". The Lamborghini Huracan EVO is magnificent.

Although other motoring media had been on rotation almost two weeks prior, it made absolutely no difference when we walked into the Lamborghini Cape Town showroom floor on Sunday evening at Century City.

There she was, a vision of stark beauty in her silver matt finish, or better known as Arancio Xanto, a new four-layer body colour from Lamborghini. Inside the cabin, it screams exorbitant with a new EVO trim. The equipment and finishes ooze of Italian finesse, the Alcantara and leather feels luscious under your fingertips with Arancio Dryope details to match the car's paint.

Fast forward the briefing and my driving partner, Jeanette Kok-Kritzinger, and I were about to be on our merry way. Jeanette is an even bigger petrolhead than I am, she had also previously driven a Lamborghini last year on launch. My nerves were not quite settled, so she took the first driving stint. Besides, who wouldn't want to be a passenger while the daughter of former rally drivers took to Franschhoek Pass? I wouldn't have wanted to drive with anyone else on this special occasion.

Today was a good day with @LamboJHBCPT. Look out for our @MrsSpeedQueen 's driving impressions of the new #LamborghiniUrus and #HuracanEVo later this week. pic.twitter.com/9fQudiO5tn

It was like going on a first date with your long-time crush. My palms were sweaty, I could hear my heart beating a loud melody in my chest, and my cheeks were hurting from the permanent grin on my face. We got the mandatory briefings, which I thought would have been much longer and intricate. But, Larisa the Lamborghini saleswoman, was a pro and demonstrated how to use the vital buttons and settings on both the Huracan and the Urus - the latter seeming to be the more complicated beast at the time.

The Huracan EVO is stupendously fast.

To give it some context, it goes from zero to 100km/h in just 2.9 seconds, and 9 seconds to 200km/h. So fast, that we missed our first off-ramp before we could read the first page directions on our route map. Perhaps a rookie error for seasoned journos, but our excitement was impalpable. Nonetheless, we got to experience the EVO in peak-time traffic on the highway, and through suburban madness on a Monday morning.

And then, it was my turn.

I got behind the wheel and hardly needed time to acquaint myself with the settings after the driver brief and getting to know when to use the relevant buttons or settings. It took me a few kilometres to shake the nerves, but it seemed like the more I drove the EVO, the more my confidence regained itself. This pairing was meant to be. I held that steering wheel a bit firmer, and pushed my right foot a bit harder on those sweeping, empty roads. Jeanette and I shrilled in delight as we were in unison with the G-forces in the sleek, low-slung car. The car's height is only 1165mm from the ground so you really get to feel how agile this glorious car is.

It's still difficult to fathom just how easy and comfortable the car is to drive for such a renowned supercar brand.

Probably what makes this car so undeniably special in an era where vehicles are now being launched as either hybrid or electric, the Huracan EVO has a naturally aspirated ten cylinders positioned in a V longitudinal middle engine. Power figures are an incredible 470kW and 600Nm available from 6500rpm which are transferred to the vast 20-inch permanent all-wheel drive by an automatic seven-speed gearbox. The dual-clutch gearbox is known as the Lamborghini Doppia Frizone, or LDF.

And of course, the sound emitting from the exhaust system's twin outlets bellows deep within the heart of the EVO, emanating a sonorous roar with the slightest tap on the throttle. The sound simply becomes addictive to your soul.

It has a Magneto-rheological suspension, Lamborghini Dynamic Steering with variable steering ratio, and electro-mechanical power steering.

There are literally three things to know about the Huracan EVO when operating it; Strada, Sport and Corsa - these are the three driving modes which you can toggle on the steering wheel at any time. 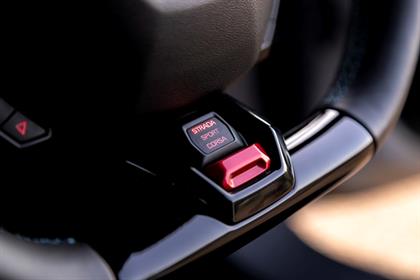 Strada - or street - mode is for when you want to drive your EVO on the daily commute to work, or when you get lost in your own back roads as we did, yet it is agile at the same time. It has the car's dynamic settings in the most softest or comfortable settings, and it's crazy just how easy it is to drive in traffic conditions. Shift gears manually via the paddles behind the steering, and you get shivers down your spine every time you gear down and hear that rumbling blip. Every single time.

Sport is self-explanatory but the car becomes really playful, and extremely exciting to drive. You have to be careful too because you have to choose your poison wisely depending on road conditions. Sport makes the EVO super tail-happy and this might not be the best option when you're blistering up Franschhoek Pass.

Corsa (best for the track) is the one you want to be in permanently on some of the Cape's best passes and open roads for more assertive driving and rougher gear changes, making the car exceedingly responsive and intoxicating. Yes, please!

Lamborghini claims a top speed of more than 325km/h, of course, we didn't reach anywhere close to that, but driving like a bunch of Miss Daisies we certainly were not.

With a car that can reach such ungodly speeds, one needs a bladdy good braking system. The EVO has carbon-ceramic brakes with fixed calipers while the monoblock is made from aluminium with six pistons in front and four in the rear. Perhaps a fourth vital fact to remember is axle lift. Make sure to have the car in Strada mode, and at the flip of one of the fighter-jet-like buttons, the car raises an additional 33mm off the ground. It might sound minuscule, but it is rather significant when you witness the difference as the suspension raises.

Lamborghini says the EVO was 'developed to amplify your daily routine', and if I could relive the feeling of sheer bliss every single day, I'd have one of these parked in my garage for sure - provided I could bag the Lotto.

There's no doubt that the Huracan EVO is the most evolved V10 in the automaker's history, and I have a new answer when someone next asks "