WATCH | Volkswagen's electric car for the masses - this is the ID.3 • The first ever series production electric car from Volkswagen is the ID.3.

• The Golf-sized hatchback made its world debut at the 2019 Frankfurt Motor Show.

• The ID.3 is one of the most important vehicles the brand will launch in its 83-year history.

Ahead of last year's Frankfurt motor show, Volkswagen hosted its bi-annual Group Night event. It was there that the world's largest car company unveiled its first-ever bespoke electric vehicle, the ID.3.

It is one of the brand's most important launches in its 83-year history. The Golf-sized hatchback is the German company's roll of the dice at enticing customers who would've have traditionally bought a internal combustion engine (ice) hatchback into an electric vehicle.

The first series production ID.3 ushers in a new path for the company and its aim is to offer electric mobility for the brand. It's underpinned by the new modular electric drive matrix (MEB) platform and will be used in future ID models. Locally, Volkswagen is running a pilot project with a fleet of e-Golf models to introduce electric mobility options to customers. Interestingly enough, the ID.3 boasts a similar footprint to the Golf.

Three battery size options will be available from launch. An entry-level variant has 45kWh and translates into a range of up to 330 kilometres. The 'middle' of the range derivative has a battery with 58kW, which enables the ID.3 to achieve a range of up to 420km.

The most powerful version sees the largest battery with a claimed 77kWh and the most electric range of up to 550km. Charging has always been a contensious issue around electric cars, but VW says thanks to a fast-charging system the ID.3 can have 290km of range in just 30 minutes.

Inside, the ID.3 shows off a 25cm touchscreen that has its App Connect, navigation and voice control. It's unlike any Volkswagen interior seen before and needs to make a statement to those the car is targeted at.

Locally, Volkswagen is introducing South Africans to e-mobility via a fleet of e-Golfs that will serve as shuttles at various dealers around the country.

Volkswagen said it hopes to retail its first all-electric vehicle during 2022. Which models those will be are to be confirmed closer to the potential launch. 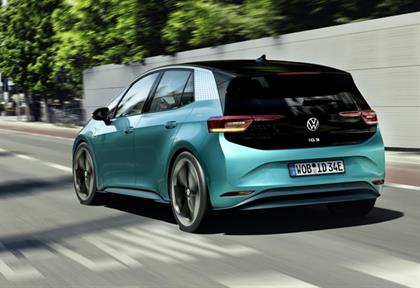