Jaguar recaptured the imaginations of sports car lovers when it launched its new F-Type some six, seven years ago. It stood out for all the right reasons, and the rear-wheel-drive setup endowed the car with some properly good on-road dynamics.

I remember my first experience behind the wheel of the F-Type was that of the 5.0-litre V8 version. That time, 370kW were sent to the rear wheels, and I recall having a memorable time on Helshoogte just outside Stellenbosch. But that V8 was wild, and the gap between it and 280kW 3.0-litre V6 was just too big.

To fill the gap, Jaguar brought an F-Type 400 Sport to market - perhaps the finest iteration of the car to date (2017).

Which F-Type model, would you say, is the most special? Email us. The F-Type 400 was a limited-edition model Jaguar brought to South Africa, and it was on sale only for the second half of 2017. It, too, implemented the V6 engine, but power was increased to 294kW and 460Nm. Power was still sent to the rears, but performance saw a welcome increase.

On the road, the dynamics never let up. Endless onslaughts could be directed towards the horizon without the fear of the car running out of talent. It was joyous piloting the machine; especially on some of the most twisting roads the Western Cape has to offer. The F-Type 400 Sport offered levels of performance that could rival its V8 sibling, but it had the drivability and ease-of-driving traits of the lesser V6 models. For 2020, Jaguar overhauled its F-Type considerably. The car is still powered by the V8 and V6 engines and said motors are believed to be more refined and faster to react to throttle inputs. Though I do not doubt that the F-Type will again be amazing and astound by the buckets, I am yet to drive one of these Jaguar sports cars that will entice and enchant as the 400 Sport.

The untamed nature of that car, the rawness, the impressive yet remorseless dynamics… This is a car Jaguar was particularly proud of, and with good reason.

If the opportunity to relive any of my pre-2020 moments with the F-Type presented itself, the 400 Sport would be at the top of that list. 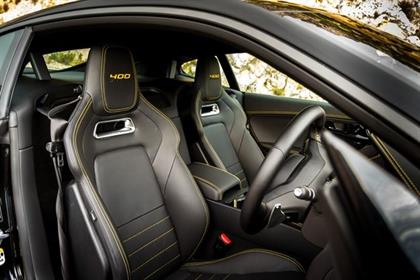