• Local powertrains and specifications to be determined

Kia has revealed the first images of its new fourth-generation Carnival. Known locally as the Grand Sedona, Kia says its new MPV will be looking to lead its segment with a combination of innovation, flexibility, and style.

According to Kia, the new Grand Sedona features a shorter front overhang, along with other changes to create a longer bonnet. Bold wheel arches and a wider track give the MPV a more imposing stance and a more sculpted appearance.

The chrome fin, which wraps beneath the tapered rear windows and extends towards the tailgate, is finished with a subtle diamond pattern that is also reflected throughout the inside of the car. In the official release, Kia South Africa said that the Grand Sedona is expected to make its local debut sometime in 2021, while the Korean market, Kia's homeland, will begin with sales in Q3 of 2020.

The specification and powertrains for our market will be announced closer to the launch.

Currently, the Grand Sedona implements a 2.2-litre turbo diesel engine that produces 147kW and 440Nm, and power is sent to the front wheels via an eight-speed automatic gearbox. Earlier this year, Kia revealed its heavily-revised Rio and Picanto, and both models will feature hybrid technology on their powertrains.

Given that these two cars are positioned lower than the Grand Sedona on Kia's hierarchy, it is not impossible to assume that the new Grand Sedona will also implement some form of hybrid technology. What might prevent this, however, is that Kia's hybrid system is mated with its petrol engines. 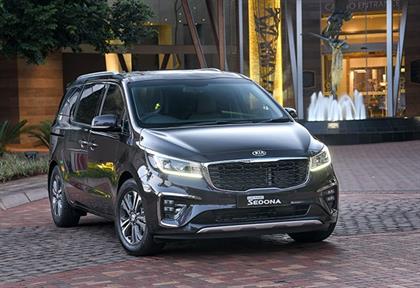