• Porsche revealed for its 911 Targa range in SA.

Porsche South Africa revealed the pricing for its 911 Targa range. The line-up consists of three models, of which the third is the very exclusive Heritage Design Edition, which is based on the Targa 4S.

All three models make use of Porsche's 3.0-litre six-cylinder petrol engine. In the 911 Targa 4, the it produces 283kW and 450Nm of torque. Power is sent to all four wheels, as with all Targa models, allowing the car to slingshot from 0-100km/h in 4.4 seconds. Porsche claims a 289km/h top speed.

The next model, the Targa 4S, produces 331kW and 530Nm, allowing the car an even faster 0-100km/h time of 3.8sec. This car, according to Porsche, has a top speed of 304km/h. The Heritage Design Edition has the same engine and power specifications as the Targa 4S. The Targa 4S Heritage Design Edition is based on the 992 generation 911 and will only 992 models be built for the global market. The car takes inspiration from the 1950s and 60s, with several design elements harking back to the 911's earlier years.

Oliver Blume, chairman of the executive board of Porsche AG, says: "With the Heritage Design models, we are evoking memories of the 50s, 60s, 70s, and 80s in customers and fans alike. No brand can translate these elements into the modern-day as well as Porsche and, in this way, we are fulfilling the wishes of our customers. We are also establishing a new product line that represents the lifestyle dimension in our product strategy with these exclusive special editions." 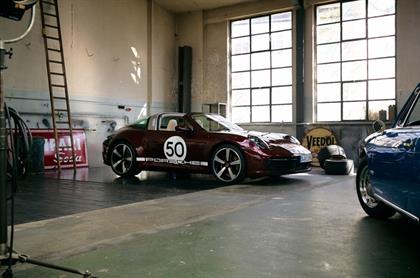 All three Targa models can be specified with a three- or five-year Driveplan, with pricing adjusted accordingly.