Depending on how you look at it, Toyota’s decision to partner with BMW on the all-new GR Supra can either be met with a celebratory fist bump, or a look of disdain.

Disdain in the sense that the Supra should have been a pure-bred Toyota.

DRIVEN | Is the new Supra more than just a BMW Z4 with a Toyota badge?

It’s a no brainer: Gazoo Racing (GR), Toyota’s racing division, has all the technical know-how and expertise to design and therefore built their own sports cars.

In 1981, when the Supra first arrived, it was an all-Toyota product. All four generations preceding this 2019 model were proudly made in Japan, because 'Rokaru wa rekukadesu!' (Japanese for Local is Lekker).

Every part, every panel, and every intricate detail of the drivetrain was made by Toyota.

What do you think of the Toyota Supra? Is it a good collaboration between BMW and the Japanese automaker? Email us.

This is what’s gotten so many fanboys - and girls - hot under the collar, because Toyota went in search of a partner - in Europe of all places - to power its fifth-generation Supra. And here’s where BMW comes in. This German automaker is known for producing some of the world’s finest, and most revered engines.

Powerful, durable, and capable to handle the onslaughts petrolheads dish out, let alone the media. What BMW also has is a chassis underneath the Z4 that suffices to the size and requirements of the Supra.

And so began negotiations to have the Supra share multiple parts with BMW’s Z4. Engine, gearbox, chassis… even the interior reminds strongly of the Z4.

But on the engine, both the Supra and Z4 share BMW’s turbocharged 3.0-litre six-cylinder petrol engine that produces 250kW and 500Nm of torque.

It’s a healthy supply of power that’s accompanied by brutal gearshifts and a harmonious exhaust sound. For some, this might not be the ideal situation - these cars sharing underpinnings - but it’s a partnership that helped to ensure that the Supra, at least, can live for another generation.

What many of us tend to forget, maybe conveniently, is that Toyota does not have a strong, brawny in-line six-cylinder engine in its garage. Oh, the 2J? Well, it’s an old engine and will not pass modern-day emission requirement tests.

Who else to turn to than BMW who’s been building six-cylinder engines for as long as we can remember. There were no two ways about it because the Supra needs to be powered by such an engine.

Nowhere in the car’s history has any other engine been used. If not for BMW and the company agreeing to share parts, then the Supra might not have happened.

BMW is renowned for producing rear-wheel-drive sports cars with phenomenal balance, and this has flowed over to the Supra, as well. Sharing underpinnings with the Z4 does come with certain advantages, but Toyota made sure that its offering is unique in own right. Part of what sets the two vehicles apart is their respective designs.

Whereas the Z4 has a foldable roof, the Supra has a hardtop with a very interesting design. Straight down the middle, the Supra’s roof splits; almost like the Red Sea.

The result of this is that it creates a greater centre of gravity, as well as aiding airflow over the big rear wing. This pushes the Supra down as speeds increase and it keeps the car planted through corners.

The Z4, on the other hand, feels more cruiser than outright sports car. It’s endowed with its own personality and driving traits. It shouldn’t be mistaken for a lesser vehicle though, because it will still bite and snap at you.

And this is where Toyota managed to get it right. Because while the two vehicles share many components, the Supra is a car in own right. It can hold its own against the Z4 and it can defend itself when criticism is directed its way. It’s been almost two decades since we last saw a new Supra, but we now have the chance to experience the latest, fifth-generation of this Japanese sports car.

And a big reason behind that is the engine. See, producing just another engine would not be that difficult for a company like Toyota. But when you factor in emission requirements, research and development costs to have the engine comply with today’s stringent tests, then you’re better off buying from someone and making a deal on how the two companies can work together on future projects. Cost- or part-sharing, if you will.

Part-sharing is not uncommon, either. Toyota and Subaru partnered a few years ago to produce the GT86 and BRZ, respectively. Ford and Mazda did it for years on their cars and bakkies.

Opel and Peugeot will be doing it with the next-generations Corsa and 208. BMW and Jaguar Land Rover recently joined forces to work on electric vehicles for the future.

The GR Supra and Z4 sharing parts is not the end of the world and is there no reason for anyone to shout 'Blasphemy!' at the top of their lungs. The Toyota GR Supra is a sports car in own right, so it’s okay to give that celebratory fist bump. 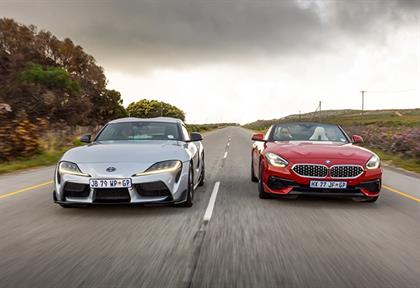