• Ford's new Ranger Thunder was one of the best-read stories of the week.

It's been another stellar week in the motoring space, with several new vehicles being either revealed and the Wheels24 team reviewing a few vehicles.

For more news and reviews on new models, click here.

Here are five of the standout new model stories this week:

The X3 M Competition is a beast of an SUV. Not only is it fast, but it has the dynamism that can rival almost any car on the road. A strong feature on the SUV is its engine. The 3.0-litre in-line six-cylinder motor is the same one that'll power the next BMW M3 and M4 and produces 375kW and 600Nm of torque. And yes, it's blistering fast!

Wheels24's Charlen Raymond writes: "The BMW X3 M Competition is a damn fast machine, and it emphatically hurls towards the horizon. There is very little to suggest that it will fail in life and that it will not succeed at its task, but the prospective owner who knows what they are buying into will not regret the purchase for a single moment. The X3 M Competition is a logical choice in a sea of sports SUVs."

REVIEW: The BMW X3 M Competition is impressive, but you can't have your yin without the yang No, that's not a typing error. The Ford Mustang is going the electric route, and this Mach-E 1400 prototype is an indication of what we can expect from Ford's electric pony. With several motors fitted, the Mach-E 1400 has a projected power output of 1045kW and will be able to generate 1000kg of downforce at 257km/h.

If you pay close attention to the video, you should also notice a pre-production version of the road-going electric Mustang.

Ron Heiser, chief programme engineer on the Mustang Mach-E, says: "Now is the perfect time to leverage electric technology, learn from it, and apply it to our portfolio. Mustang Mach-E is going to be fun to drive, just like every other Mustang before it, but Mustang Mach-E 1400 is completely insane!" Lexus' UX250h EX also came in for review. The hybrid model is powered by a 2.0-litre petrol engine that produces 107kW and 180Nm. An electric motor increases power to 135kW. The hybrid UX is said to be the fuel-efficient option in the range and, after several days of testing, we averaged 6.9-litres/100km. Some way off Lexus' claimed figure of 4.5-litres/100km.

Lexus could expand the UX range with an all-electric model in 2021, but the model is being considered for the local market. There's a new Ford Ranger on the way, and it's called the Thunder. As it stands, the Thunder will slot in between the WildTrak and Raptor models and will be available in double cab configuration, only. Though we do not yet know what the exact specifications of the Thunder will be for the local market, one can expect several of the WildTrak's features to be carried over.

Early in the new week, Wheels24 will run another article on the Thunder, listing four facts you should know about the bakkie. Be sure to keep an eye out for it!

READ: Ford's new Ranger Thunder expected imminently - How the bakkie could be priced when launched in SA In an unlikely turn of events, did you know that Hyundai and Nissan are competing for a slice of the same pie? The NP200 and Gandi10 Cargo may be cut from a different cloth, but neither is afraid to carry a load. The Nissan, with its open loading bay, has a load volume capacity of 1250L, whereas the Cargo isn't too far behind on 1202L.

Though there are several more factors we investigated, the Grandi10 Cargo bests the NP200 in terms of price and features inside the cabin.

Wheels24's Charlen Raymond wrote: "Though there are other vehicles on the market that can double as cargo vehicles, the NP200 and Grandi10 Cargo are dedicated to this purpose. Ultimately, the Grandi10 Cargo and NP200 see to different needs, and where you should sign will come down to preference." 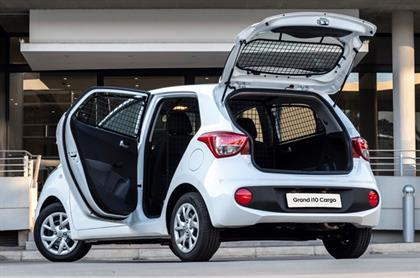