Engine, specs, pricing - Everything you need to know about Volkswagen's new T6.1 family

• Volkswagen's new T6.1 has been shown to the South African public.

Volkswagen refreshed its T6 range, which will now be called the T6.1. Referencing the automaker's Transporter range, now in its sixth generation, the family of vehicles under this umbrella consists of the Pick Up (Single and Double cab), Panel Van, Crew Bus, Kombi, Caravelle, and California.

Volkswagen says that it's T-Series has sold more than 12 million units worldwide since coming to market all those decades ago. In South Africa, since the T6 arrived in 2015, more than 10 000 units have been sold in the following years.

Inside, the instrument panel has not only been digitalised but also sees increased levels of practicality. The front panel has been equipped with an additional shelf in front of the driver. Also new is a larger tray for a smartphone with an inductive interface for charging - which is an optional feature. The air vents in the dashboard can now be adjusted in every direction and simultaneously opened or closed using one slider control.

VW claims that the 10.25-inch digital cockpit in the T6.1 sets new standards. It is fitted as standard in the Caravelle Highline and California. The graphics of the high-contrast display have a clear, high-quality look. The driver can choose between different screen configurations which is done via the 'View' button on the multifunction steering wheel.

Do you think VW's T6.1 will continue with the success its predecessor enjoyed? Email us with your thoughts. Volkswagen will launch the T6.1 range with three 2.0-litre turbo diesel engines, with outputs ranging from 81kW to 146kW.

The 81kW version of this engine has a maximum torque of 250Nm, available at a very low 1250rpm. This engine is mated to a five-speed manual gearbox and a fuel return of as low as 7.3-litres/100km. 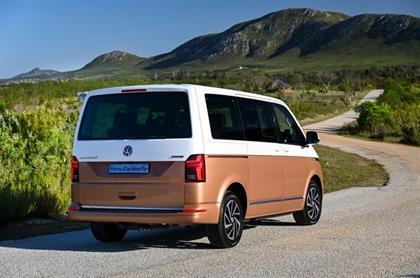