• New Audi S6 is the sportiest model in the A6 range.

• It is fitted with the carmaker's Quattro four-wheel drive system.

Audi Sport's portfolio is well stocked with models to fight for a piece of the pie in several segments. From the gutsy S1 through to the RSQ8, the performance arm of Audi offers a solid punch.

As we've come to know about fast Audis, they are fitted with four-wheel drive for greater traction. It harks back to the brand's rally heritage and the original Quattro.

The model in question here is the latest S6. Locally, the S6 made its debut just before the new millennium. Back in 1999 it had a claimed 0-100km/h sprint time of 5.7 seconds, swift which ever way you look at it.

Its power was derived from naturally-aspirated 4.2-litre V8 engine that produced 250kW and 420Nm. As part of the gentleman's agreement, the top speed was limited to 250km/h.

It went out of production in 2003 and was replaced by a turbocharged version. Power increased to 331kW and torque was 560Nm, a substantial difference.

On paper, the next generation S6 is probably my favourite. Code named C6, the S6 5.2 FSI Quattro was unveiled at the 2006 Detroit Motor Show.

The 5.2-litre V10 is also found in the Lamborghini Gallardo. However, the Audi variant features a longer stroke and wider bore, increasing the engine's displacement.

The all-aluminium engine featured the brand's fuel stratified injection (FSI) technology. Power was lower than the previous generation S6 with 320kW and 540Nm.

In 2013 Audi released the C7 S6 4.0 TFSI Quattro and S7 simultaneously, the latter model is marketed as a four-door coupe. They shared the same 4.0-litre twin-turbocharged V8 engine with 331kW and 550Nm.

It used a seven-speed dual clutch gearbox and even wore its green hat with cylinder deactivation and stop/start technology.

And in 2019, the latest generation S6 was unveiled. I first saw it in the flesh at the Frankfurt Motor Show, admittedly my eyes were glued to the new RS6. 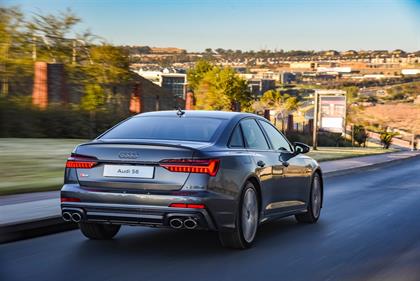 And that brings me onto a good point, the S6 has always been a 'sleeper' car. The massive wheels and exhaust pipes the size of commercial plane jets, were fitted to the flagship RS6.

The S6 only had a nondescript badge front and rear and four tailpipes, two each side. As a car guy I could always spot one from a mile away, but sometimes it was difficult to differentiate it from a normal S-Line model.

So, what about the new one? Well, it uses the same 2.9-litre V6 twin-turbocharged engine used in the RS4 and RS5 and produces the same amount of power: 331kW and 600Nm.

It is also classified as a mild hybrid.

Interestingly, the engine in the S6 features a 48-volt electrical system married to a electric-powered compressor (EPC). If the EPC smells any hint of turbo lag, it swoops down like Superman and gets rid of it.

The aim is to make the engine feel closer to a naturally-aspirated motor in how it delivers power. With the 48-volt electric engine and EPC working like clockwork the power doesn't feel like an elastic band being stretched and then released quickly.

The interior is what you'd find in the new Q7 and A7 and is filled with two huge touchscreens, brushed aluminium and high-gloss black plastic. The nature of V6 in the S6 is markedly different compared to its smaller siblings. It's fast. Audi claim a 0-100km/h sprint time of 4.5 seconds and it is needs to restrained at 250km/h.

The S6's beautiful ride, courtesy of its optional adaptive air suspension  gives me a sense of 'waftiness' over every type of road surface. It's exceptional.

The large sedan puffs its chest in long distance driving situations. With a massive 530 litre boot, comfortable seating for a family of five and an exceptional ride manners it'll be brilliant for road trips.

A couple of squirts around my favourite twisty pieces of asphalt drew grins galore, and the sheer pace and grip the S6 translates to the road is impressive.

The eight-speed automatic torque converter gearbox is super smooth when left its own devices but offers fast changes when I used the paddle shifts.

But for the most part, the new S6 is an exceptional large sedan than has a very powerful engine. The understated looks have me swooning, particularly in the black hue of our test car. A nice touch are the soft-close doors.

Overall, at R1 582 400 tested, the S6 offers a lot of standard kit including the virtual cockpit digital display, a superb Bang and Olufsen sound system and adaptive LED Matrix headlights.

As an understated performance car with loads of space and intelligent technology, you can't go wrong with the S6.