The French automaker's new Triber goes up against the Suzuki Ertiga, Datsun Go+, and the Toyota Avanza in terms of price. But the Triber has two extra seats up its sleeve, it’s a seven-seater.

The automaker made it clear that the Triber does not share the same underpinnings as its entry-level Kwid or its cousin the Datsun Go, but is built in the same Indian factory. However, the Triber is built in India on a modular platform.

The engine, a tiny 1.0-litre naturally-aspirated unit with 52kW and 96Nm, is mated with a five-speed manual gearbox. An AMT (automated manual) is optional and adds R10 000 to the sticker price.

For practicality and (marketing) purposes, the seats can be configured in 100 different combinations, according to Renault.

The three simple ones are two-seater, five-seater, and seven-seater. In normal situations, Renault quotes a boot size of 625-litres, which Renault claims is both "impressive and class-leading." 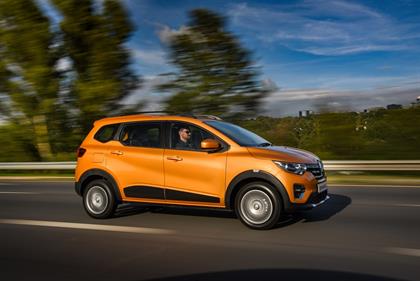 With the launch in the coastal city of Durban, the diminutive engine at least had a fighting chance to show how it could perform.

Around the city, I could eke out as much torque as possible but the car struggled when our test route took us through the Midland's area and hills were at the order of the day. With the air conditioning on, it felt even more sluggish as I traversed the beautiful green hills.

The five-speed manual gearbox, again, does a fine job in slow-moving, robot-to-robot driving situations, but you'll need to get into the lower cogs to overtake or catch up with traffic. It'll happily chug along at 120km/h, albeit at high revs.

READ: Why Renault's new Triber could be a sales success in SA

As for its handling, I didn't have high expectations mainly because of the Triber's lofty ride height (ground clearance is quoted at 182mm) and its tall, narrow stance.

The steering is light, but there's enough feedback to tell you're in control of the car and it's not going wayward.

There is the predictable body roll when cornering and the high seating position adds to the feeling of sitting 'on top of the car' but that's exactly what Renault aimed for, to feel as if you are driving a larger car.

It doesn't have the space of a large SUV however, passengers in the second and third row of seats benefit from decent headroom by an increased roofline. Three trim levels will be offered: Expression, Dynamique and the top of the range Prestige. Notable features in the entry-level model include a cooled storage console, 12-volt socket in front while the Dynamique model adds a 20cm touchscreen infotainment system with Apple CarPlay and Android Auto functionality.

The Prestige model can be told apart from the other models by its LED daytime driving lights and also has keyless entry and a reverse parking camera.

Renault is bullish with pricing that starts at a competitive R164 900. The Triber competes with the Datsun Go +, Suzuki Ertiga (another seven-seater) and the Toyota Avanza.