• Volkswagen revealed a hotter Clubsport version of its upcoming GTI.

• The Clubsport will not be available in South Africa.

While Volkswagen's new Golf 8 GTI is on its way to South Africa, news of a Clubsport model broke on the internet.

Powered by a 221kW version of the turbocharged 2.0-litre engine that does duty in the upcoming GTI, the Clubsport is the most powerful model in the new GTI family. Torque comes in at 400Nm.

The Clubsport first appeared in 2016, on the Golf 7.5 GTI, as part of the Golf's 40th birthday celebrations. Six years later, a new version has been shown, but it will, sadly, not be making its way to South Africa.

Volkswagen says that the new Clubsport has been honed for the racetrack. The front bumper looks almost open, with the honeycomb grille a typical design trait of the GTI. Larger aerodynamic wings offer resistance to headwinds.

The two-part spoiler at the rear has been specifically designed and reserved for the Clubsport, but the entirety of the car's aerodynamics has been done to reduce downforce significantly. 18-inch alloy wheels are standard kit on this hot hatch.

A special diffuser, a body lowered by 10 millimetres, and wider side sills also enhance the overall sporty impression. Another new feature: oval tailpipes replace the round version in the sports exhaust system, with one tailpipe positioned on the left and right of the body.

Would you have bought the new GTI Clubsport if it had come to South Africa, and why? Email us. 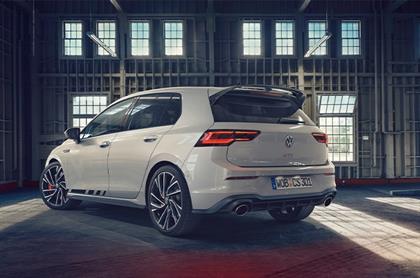 Codenamed EA888, this engine is no stranger to Volkswagen and its products. Tuned to deliver 221kW and 400Nm, it is also equipped with VW's new Vehicle Dynamics Manager (VDM). VDM closely integrates control of the electronic differential locks (XDS) and the lateral dynamics components of the optional adaptive chassis control DCC.

In the new Golf GTI Clubsport, however, the standard electromechanical front-axle locking differential is now included in the VDM's network for the first time."

Karsten Schebsdat, head of driving dynamics, steering and control systems at Volkswagen, says: Networking all driving dynamics systems means that the new Golf GTI Clubsport handles even more neutrally and precisely than the classic Golf GTI. For the legendary Nordschleife track, we have also programmed a new Nürburgring profile, which specifically adapts the running gear components in the new Golf GTI Clubsport to this race track."

Power is sent to the front wheels via a seven-speed dual-clutch gearbox (DSG).