• The Gasly/Albon swap at Red Bull remains a topic of interest.• Mercedes to lap the field again at Silverstone in August.• For more motoring stories, go to www.Wheels24.co.za

James Forbes, who shared the Auto Investment Ligier with Franco di Matteo after the withdrawal of scheduled co-driver Riaan Botma, came home in second with Dean Wolson, Philip Meyer and GerCharl Arangies and Xolile Letlaka (Into Africa Mining/Vaal Fluid Systems SA Lamborghini Huracan) celebrated their new partnership with a lights-to-flag victory in the Backdraft 500, the opening round of the 2020 SA Endurance Series championship, at Zwartkops Raceway on Saturday, 25 July. ald Wright in the Wright Motorsport Sports 2000 completing the podium.

The race was brought to a premature end when Bryan Morgan had a massive crash which resulted in his car bursting into flames. However, the race was the first official event in South Africa after a four-month break due to the lockdown and was run under strict Covid-19 protocols with no spectators permitted. Luckily Morgan was able to escape the burning car with only minor injuries and, together with co-driver Donovan Taylor, still claimed fifth overall and first in the new Backdraft Roadster class. Xolile Letlaka and Charl Arangies got their new partnership off to a great start. Image: Paul BedfordIn the absence of Franco and Silvio Scribante's Chevron B26, which was suffering from an elusive misfire, it was left to the Stradale Motorsport Lamborghini and the Autohaus Angel Ferrari 458 of Marcel and Dayne Angel to fight it out for pole position.

Arangies claimed the honours, just 0.068" ahead of Dayne Angel to head the front row of the grid. James Forbes was next up with Graham Vos (Ecurie Zoo Juno) alongside him on the second row. The Scuderia Scribante technicians did their magic on Friday and finally got the Chevron running late in the day, allowing it to take up fifth on the grid ahead of the Backdraft Roadster of Tony Martin and Mike McLoughlin.

The Volkswagen Motorsport Super Polos were next up, leading the way in Class B. Daniel Rowe and Keagan Masters got the better of teammates Jonathan Mogotsi and Brad Liebenberg to take seventh. In the Backdraft Roadster class, Reghard Roets and Steve Clark led the way in the Old Dog Racing entry. They started in eleventh with Stiaan Kriel and Kosie Weyers (Kalex/Creative Ink Backdraft Roadster) and the Team N4 Autocraft entry of JP Nortje, Piet Norje and Roelf du Plessis just behind them.

A bit further down the grid, the FSS International entry of Mike Barbaglia, Eric Gander, and Luiggi and Elio Muzzulini led the way in Class A in their Polo.

When the lights went out to signal the start of the 4-hour race, Charl Arangies immediately opened a gap at the front. By the time the first round of pit stops happened, he had opened up a one-lap advantage over his closest rival, Dayne Angel who took the wheel of the Ferrari for the opening stint.

The Scribante Racing Chevron was the quickest car on the track, setting the fastest lap of the race, but Friday's problems returned forcing them to spend a lot of time in the pits. They were eventually classified down in 20th position at the end of the race.

Shortly after the first round of pit stops, Marcel Angel went slightly wide on the exit of Turn 8 and then shot across the track and into the pit wall, bringing his challenge to an end. With the Ferrari out of the race, Arangies and Letlaka had a relatively easy path to their first win. 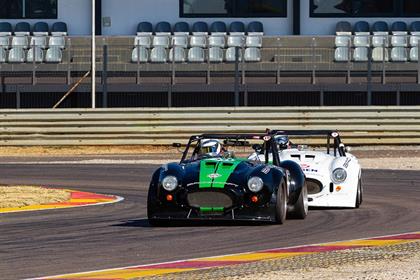 Despite a huge crash, Bryan Morgan and Donovan Taylor were the first Backdraft Roadster home. Image: Wheels24 / Paul BedfordForbes and di Matteo couldn't catch the Lamborghini ahead of them, but were comfortably quicker than the rest of the field and ended in a somewhat lonely second place. With both of the Backdraft Roadsters in Class GT5SA falling victim to mechanical maladies within the first hour, and a few other contenders experiencing problems, the Wright Motorsport Sports 2000 slowly made its way up the leaderboard to claim third place and the Class V win when the race came to an end.

Liebenberg and Mogotsi had to play second fiddle to their team mates Masters and Rowe in the early stages of the Super Polo battle at the head of the tin-top Class B category. However, a fortunate safety car period handed them an advantage when they made their pitstops led them to take fourth overall, and the Class B win.

With just over 30 minutes left on the clock, Bryan Morgan had his huge accident forcing the clerk of the course to bring out the red flags while Morgan was taken to the medical centre and the firefighters did their work.

Bearing in mind the Covid-19 curfew in place in South Africa, the officials decided not to restart the race to make sure the teams would still have time to pack up after the event. This led to Morgan and Taylor being classified in fifth and first in the Backdraft Roadster Class E.

Clark and Roets were next up, just over 30 seconds adrift claiming sixth and second in class with Kriel and Weyers in seventh and third of the Backdraft Roadsters.

Kishoor Pitamber and Bradley Scorer brought the Fast Developments Mini home in eighth with gave them second place in Class B, just ahead of Rowe and Masters who ended in ninth. The Team Petsy Racing Backdraft Cobra of Eduan Bester and Barend Pretorius completed the top ten.

In the Index of Performance standings, Morgan and Taylor claimed the honours ahead of the Wright, Wolson, and Meyer Sports 2000. Pitamber and Scorer in the Mini ended third fractionally in front of the Squadracorse Polo of Nathi Msimanga, Reobaka Komane and Courtney Nicholl. Clark and Roets took fifth in their Backdraft Roadster with Gossman, Masters and Morgenrood rounding out the top six.

The next round of the SA Endurance Series is scheduled to take place at Port Elizabeth's Aldo Scribante Race Track on 15 August 2020.