• The Polo Cup returns to action on 7 August at Zwartkops Raceway for Round two.

• The teams must adhere to strict Covid-19 regulations and protocols.

The one-make Polo Cup series will resume racing early next month at Zwartkops Raceway after receiving the green light from the Department of Sport and Recreation.

Due to a government-implemented lockdown because of the coronavirus outbreak, motorsport like most other non-essential activities has been put on hold in the country.

Five months after the first round of the Oettinger Polo Cup took place at the same venue, the field of more than 20 cars will rev their engines on Saturday 8 August.

All teams must comply to a set of strict Covid-19 protocols as prescribed by government in association with Motorsport South Africa. The race will take place 'behind closed doors' as no spectators are allowed to enter in accordance with government’s regulations with regards to public gatherings.

The first round of the 2020 season was won by Capetonian Dario Busi who grabbed pole position and went on to a  maiden race win in race 1. 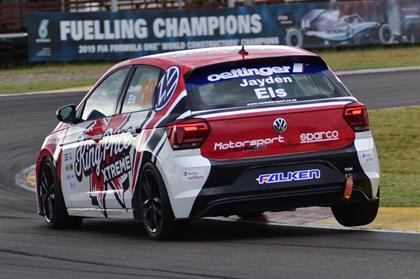 It'll be a level playing field when things get underway in August again. However there are a a list of proven race winners and podium contenders to name but a few include Jurie Swart from Cape Town, the Shorter brothers Matt and Chris, Stiaan Kriel, Adrian Wood and Keegan Campos.

"The series has produced several champions in the past and the next batch of future champions are already making their mark," says head of Volkswagen Motorsport Mike Rowe. The weekend will also see the debut of the eagerly-awaited SupaCup class which will serve as the second category of the Global Touring Car series.

The official GTC series is yet to get underway, but Zwartkops will see nine identical SupaCup Polo GTIs battle it out.

In the mix will be former Polo Cup champions such as Bradley Liebenberg and Jeffrey Kruger, as well as Volkswagen Motorsport’s Jonathan Mogotsi who is looking forward to the challenge.