Change of approach: Why Lewis Hamilton should be aggressive in the first F1 race this Sunday

• Verstappen and Leclerc could be Hamilton's greatest rivals this year.

2020 is a big year for Lewis Hamilton. The British Formula 1 driver is on the cusp of rewriting more of the sport's record, including equaling and eclipsing a few set by Michael Schumacher.

On his way to achieving that, Hamilton must compete in the strangest F1 season in history, along with 19 other drivers who are also hoping of making the best of the unique circumstances.

But for Hamilton, the pressure will be mounting as he looks to solidify himself as one of the sport's all-time greats. It can perhaps be assumed that he will walk to a seventh championship with ease, but early indications suggest that it might not be the case.

How so? Well, the Hammer will have several obstacles to contend with this year, which will require an aggressive onslaught from the very first lap of the 2020 season.

Who, according to you, will be Hamilton's greatest challengers for the title this year? Email us. 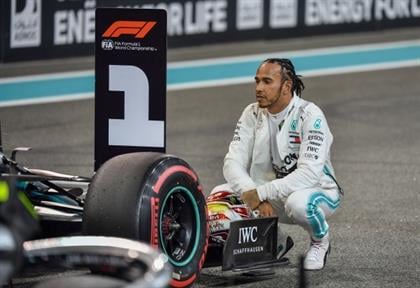 These new regulations will have a drastic impact on the revenue generated, but several steps have been put in place to both mitigate the losses and accommodate host venues.

The ghost races will be something both F1 as a whole, and television audiences will have to get used to, but it is in the best interest of everyone directly involved in making racing possible. The 2020 season will, for now, consist of eight races, but more races are planned from September to November.

The first race of the 2020 F1 season, this weekend in Austria, will see all ten teams compete in what will be a new experience for everyone involved. The driver who wins, however, will be in prime position for championship glory - given the shortened calendar. Don't ease into it

Anyone who follows Hamilton's F1 career intently will quickly pick up on a pattern. He will start a season rather slowly, but then pick up momentum and carry it throughout the remainder of the season. It's tactic that's gifted him five world championships since 2014, and one that crushes rival drivers' ambition.

Why it has that effect on other drivers can be attributed to several reasons, but what is for sure is that while others go all-in from the off, Hamilton eases into it - almost preserving his body's resilience for a calendar consisting of 20 races. The stresses the human body is exposed to during an F1 race are crazy, and it can tire you out. Yet, Hamilton is consistently in better shape than his rivals as the season endures.

But in 2020, Hamilton can't take that approach because the preliminary season will consist of only eight races. That's less than half of the 20 we've seen in recent years! As such, a slow, cerebral approach will not cut it. If F1 sticks to the penned-in eight races (more races are planned), Hamilton must be aggressive from the moment the lights go out in Austria this weekend (3 - 5 July). There will not be time to ease into the season and trumping rivals when your endurance levels are still to peak. With eight races confirmed, Hamilton has no choice but to put the hammer down. While there can be no denying that Hamilton is the benchmark of the current generation of F1 drivers, he is nearing the age when retirement becomes an option. Fortunately, (we hope) that will not happen at the end of 2020. There are a few drivers acutely aware of this, and they will be hoping to take advantage of it.

Max Verstappen (Red Bull Racing) and Charles Leclerc (Ferrari) are two of F1's youngest drivers with great futures ahead of them. Driving for their respective teams, in 2019, each driver got the better of Hamilton at certain races of the season. In Belgium and Italy, for example, Leclerc kept Hamilton at bay to take two back-to-back victories. Knowing that they can beat Hamilton - provided their race cars can hold a candle to the dominance of the Mercedes - they, too, will come out of the blocks with an aggressive approach.

Their hunger and desire for F1 glory are the same as Hamilton's some 13 years ago, and the Brit will be driving against himself in two reincarnated forms. Ferrari and Red Bull Racing are Mercedes' closest rivals, and Leclerc and Verstappen are the two drivers, outside of Mercedes, most likely to topple Hamilton.

Hamilton joined F1 in 2007, driving for the McLaren-Mercedes team alongside Fernando Alonso. In his first race, in Australia, he finished in third place. But at the Canadian GP, just a few races later, he scored his first win. Canada would go on to become one of Hamilton's favourite racetracks, as more victories at this venue were signed to his name.

In 2007, he tied with Alonso on 109 points, one behind eventual championship winner, Kimi Raikkonen. The following year, he won the driver's championship, becoming the youngest champion in the sport's history (23y 09m 26d), until Sebastian Vettel took that honour in 2010.

READ: How Nico Rosberg took on a 'safe' approach en route to 2016 championship

It would be another six years until Hamilton would win another championship. In 2013, he jumped ship to the Mercedes team to replace the departing Michael Schumacher. That year was a so-so season, but in 2014, when the new, turbo-hybrid era began, Hamilton would romp to his second drivers' championship. He'd continue to repeat the feat in 2015, 2017, 2018, and 2019.

Hamilton is the most successful driver in the new era, having won more than 50% of all races since 2014. Over the span of his career, he secured 88 pole positions (most in F1 history) and 84 race victories - just seven shy of the record-91 races held by Schumacher. If his 2020 season goes to plan, Hamilton could surpass Schumi's winning record, as well as equal the great German driver on seven F1 championships.