• Several components have been stripped, but the engine remained.

• The R 18 Dragster had to be functional and authentic.

Roland Sands, a custom bike designer in Long Beach, Florida, stripped down a BMW R 18 and gave the bike his personal touch. The result: the R 18 Dragster. The R 18 Dragster retains the original bike's two-cylinder boxer engine, with everything being built around it.

Sands explains: "With an engine that's so visibly the center piece, I immediately thought of muscle cars. My family has always been into going fast and my dad was a drag racer, so I thought it made sense to strip the bike down to the essentials and shape it to go fast on a straight track."

Sands says that his ideas take form on paper, which allows him to figure out the basic shape and what the stance and geometry of the bike could look like. BMW says its new R 18 has a highly customisable design and features an easily removable rear frame and a simple-to-dismantle parts set. Despite this, Sands and has team had their work cut out to work around the electronics, given that they "put in nitrous oxide, stripped out the stock exhaust and changed the intake drastically."

In order to change the bike into a drag racer, the design team retained the stock neck geometry of the R 18 and removed the rear end. The bike's original bodywork has also been retained, but the front and rear fenders had to be modified to fit the new frame. The entire process took about three and a half months to complete.

Sands says: "Every bike needs different sources depending on the build, special materials or parts. Every new bike concept is a bit of a learning process even after having built over 200 bikes. We always want to understand the genre of the bike we are building in, it's the key to keeping it authentic and functional." 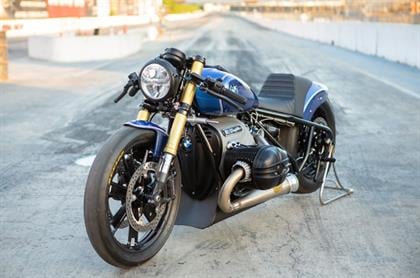