Earlier in March 2020, Wheels24 posted a video of a French motorbike rider flirting with death at 250km/h.

In the video, the rider squeezes between two oncoming riders. The footage is scary, but the motorcyclist and his friend come away unscathed.

Wheels24's Charlen Raymond said: "Road safety is everyone's business. And just because this clip was filmed in Europe, it does not mean that we, as South Africans, are exempt from adhering to the rules of the road.

"Given that South Africa's biker community is such a close-knitted one - yes, I understand the significance of the skull - I call on all bikers to ride with 'road safety' at the forefront of their minds.

"And motorists, let's also do our part to minimise the carnage on our roads."

WATCH: French biker flirts with death as two others speed by at over 250km/h!

Giving greater insight on why these bikers ride at such high speeds, avid biker and Ultimate Drive editor, Johann van Tonder tries to make sense of the situation.

Van Tonder says: "Speed and acceleration are addictive. More so on a motorbike where the experience involves all the senses. The power of that machine is something else, and it's under your control! It's difficult to explain the experience to non-bikers, though. Car enthusiasts get excited at around 200km/h. For a biker, 200km/h is an indication to shift to third gear.

"The power-to-weight ratio on a superbike enables it to propel forward at a rate no car driver will ever experience unless you drive a very fast super- or hypercar.

"You unleash the beast, and in the first milliseconds your whole body tightens up as you grip the handles to have control over the machine. Almost immediately, and in a very swift movement, your fingers grab the clutch to hook second gear, 100km/h comes up so fast you don't have time to comprehend it. Soon after that, it's third. It's been a couple of seconds since you pulled off, but the speed is already on the other side of 200km/h.

"With every new gear, there is a powerful surge forward. Your heart rate is through the roof, and your body is running on pure adrenaline. The engine revolutions and speed keep climbing, approaching 300km/h as your vision narrows; only focusing on the road ahead. At this stage, you are almost covering the length of a rugby field every second. It's an experience like no other, and one maybe only a fighter pilot will understand." 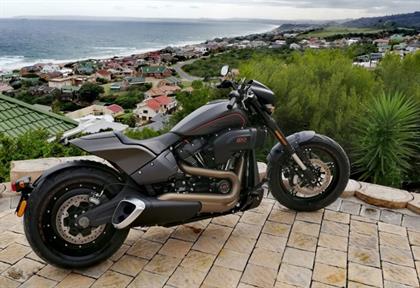 Craving for the experience

"Yes, it's illegal. Yes, it's irresponsible on a public road. But now and then, on a Sunday afternoon on a deserted road, bikers will do top-end runs. If you have experienced it once, your body craves for that experience again. And since I speak of experience, I do understand that notion.

"For a lot of bikers, my story is similar to theirs. We escape injury, or death, time and again, until one day that story is told a bit different: The revs and speed keep climbing, approaching 300km/h as your vision narrows, focusing on the road ahead. At this speed, you have very little to no time to react. For a millisecond, your eyes widen as a car pulls into your path. You never even had time to touch the brakes before impact.

"As a biker, I understand why we ride fast. Whether you are on a track or just on your way to the cafe, any powerful bike begs to be opened up. But as the saying goes: with great power, comes great responsibility.

"The bikers in the video got lucky that day. And we, as bikers, watch the video because we understand the rush. I’m guessing they are taking it easy now, at least for a couple of months - at least I hope so. But it's important to always adhere to the rules of the road - whether you're in a car or on a bike.

"Let’s learn from the video and be safer road users. Let’s be safe out there." Disclaimer: Wheels24 encourages freedom of speech and the expression of diverse views. The views of columnists published on Wheels24 are therefore their own and do not necessarily represent the views of Wheels24.